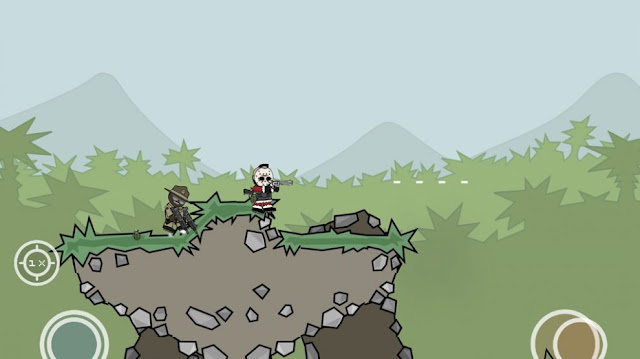 Mini militia is that game that everyone just can’t seem to stop playing,even though it looks unimpressive and here is why.
While Mini Militia is unassuming at a glance, this game is fun.It brings out the competitiveness of friends and family, making it a hit among school aged children. The weapons, graphics, and overall gameplay makes this a great game and the online experience impressive.
Pros
Excellent Multiplayer
Lightweight
No in app downloads necessary
Free with in app purchases
Profile is stored on your Google account
Cons
Average single player mode
No story mode
Not available in some regions
Some maps are not conductive for play and are ignored
Too many weapons are for paid app only
In game hacks are too easy to get
Doodle Army 2: Mini Militia is the sequel to the original Doodle Army game that has proven to be popular whole wide. Lets
look at the popular yet underrated game that can become addictive, fun and downright competitive.
The Basics
Platform: Android (3.0 and up) iOS (6.0 and up)
Developer: Appinsomniacs
Type: Shooting
Difficulty: Moderate (Some strategy required)
Graphics
The Graphics of this game are nothing to shout about, however the beauty of this games lies not in the graphics. The graphics of this game are, 2.5 D at best, with a little of gore when being shot and killed (the avatar breaks to pieces). Explosions and gas traps are not really impressive but they are not bad either. Overall the graphics of the game,
separately, is not impressive as other titles, but combined with the rest of the game, you wouldn’t have any complaints.
Weapons
Mini Militia features a host of modern day as well as futuristic
guns and grenades. There is also the ability to wield dual
guns but not all can be use this way. Players have a limit of
two weapons at all times and three grenades. Some weapons
are only available to paid players as well as duals, though all
weapons are available in LAN play.
A list of weapons present in the latest version:
Desert Eagle | Uzi | Magnum | MP5 | Ak-47 | M4 | M-14 | Shot
Gun | M93BA (Sniper) | PHASR | Flame Thrower |
Fragmentation Grenade | Proximity Grenade | Gas Grenade |
EMP | Machete | Saw Gun | SWAM (Bazooka) | Shield
Power Ups
No game would be fun without a bit of help and Mini Militia is no different. Power ups can be found throughout the map on multiplayer mode whether LAN or WiFi and are readily found. No power ups are available in single player mode. Here is a
list of Power-ups available: Rocket Booster- for longer flights
Health Restore
Extra grenade
Game Play
While the single player is a bit disappointing, Mini Militia has outdone itself on the multiplayer aspect.
The single player
consist of a tutorial on basic controls and the likes and involves shooting robots to get a high score. But the multiplayer is where Mini Militia shines. In LAN play, a total of
six (6) players can play at once through mobile hotspot. Here you can choose any weapons you want and you can use duals as well. The player with the most kills wins. The same rules apply for online play, but you gain points which you can use in the store to purchase upgrades such as more grenades,
etc. In addition, there are two points system, one for skills which is dependent on how much deaths you average per game, and rankings – which you gain points for each kill you earn. A record is kept of your death/kill ratio as well so you can compare with friends.
Previous
REVIEW: Tecno Camon X Pro Unboxing, Reviews And Price
Next
Mobile USSD codes for Banks in Nigeria